Robots in Manufacturing: 3 Sobering Truths You Need to Know 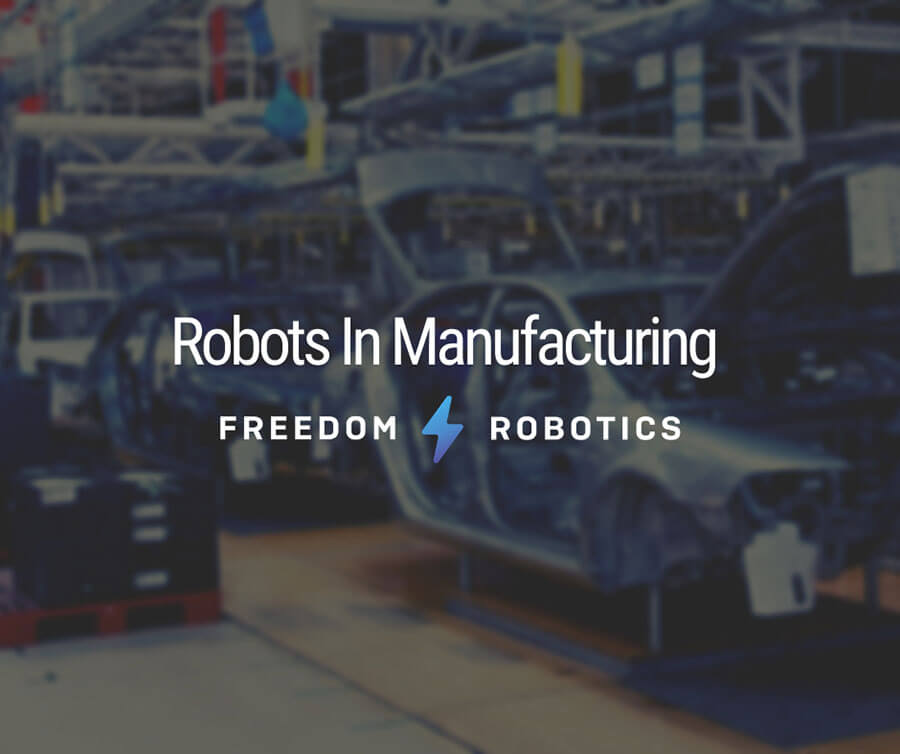 The true purpose of automation is to provide a Return on Investment (ROI). However, we often see industrial manufacturers make a massive push to deploy robots on their factory floors in a manner that almost guarantees an absence of ROI.

If you're interested in automating tasks that deliver measurable value to the enterprise — i.e., a pragmatic approach — then please read on. If you would like to continue paying vast sums of money for inflexible automation systems that don't utilize readily available modern technology, perhaps this isn't the article for you.

At Freedom Robotics, we've worked with thousands of robots, overseen hundreds of deployments, and have witnessed countless successful legacy technology integrations. In each case, our goal was to automate tasks that deliver measurable value to our customers.

But we've also had some attempts at integration fail. When they did, the root cause was almost always a lack of pragmatism.

A Sobering Truth About Robots in Manufacturing: ROI is Not Guaranteed

Based on our experience within the walls of some of the most modern industrial manufacturing facilities in the United States, less than 10 percent of conveyance tasks are easily automated with robots.

It gets worse. Before our arrival, approximately 80 percent of robot projects we’ve seen have been over-budget by more than double and took six months to a year longer than expected to deploy. 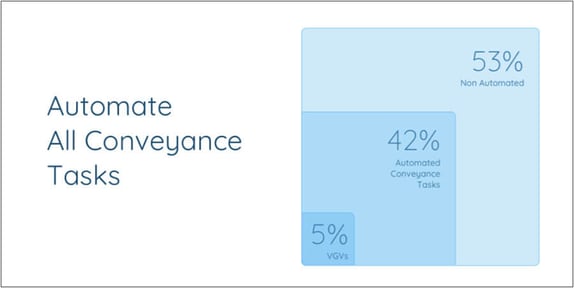 The robot revolution has simply not occurred. The future hasn’t arrived. Robots are not living up to their promise. Why is this? We've identified three major challenges that act as roadblocks.

The result? Manufacturers leave billions of dollars in cost savings on the table. It doesn't have to be this way.


Automation & Industrial Robots in Manufacturing: An All Too Real Hypothetical

Freedom Robotics works with leading manufacturers who are working to automate conveyance tasks. Large manufacturers, including those in the automotive industry, employ thousands of tugger drivers. The tuggers transport trailers full of parts, in a specific order, to various sections of the production line with the end goal of assembling finished goods like vehicles, equipment, and consumer products.

Manufacturers like these are on a never-ending mission to drive down costs per product created. There is clear ROI potential in automating these drivers' tasks via robotics, but the road to realizing such benefits is never straightforward as there are always challenges along the way.

Let's take a closer look at the specific challenges we've identified that prevent customers like our industrial manufacturer from fully realizing the benefits of robots, as well as pragmatic and definitive solutions to each.

Challenge I: Robots Take Too Long to Integrate

Integration is difficult. There are numerous moving pieces and few widely adopted standards capable of fully tying factory automation together. In fact, an MIT report on industrial automation found that robots in use on industrial manufacturing factory floors typically possess their own programming language and communication protocol, with an estimated 17-20 different languages in use, most of which are proprietary.

In a simple setting, autonomous robots in manufacturing perform the tasks they are instructed to execute. But the systems they are meant to integrate with — 15-year-old Programmable Logic Controllers (PLCs) — increase the complexity of the work.

The result is longer than expected ramp-up phases and over-reliance on outside Systems Integrators (SIs) who take tribal knowledge of your systems with them as soon as they exit the building.

"Can't we just have the robot do [insert something that sounds simple]?"

Let's examine a particular task performed within an example industrial manufacturer’s walls: gasket delivery. This is an easy task to automate. It's a simple loop that sees a part delivered from one location to another.

Shortly after identifying a task like this that you wish to automate, the word "just" starts to appear. Here is a list of "just" statements:

They will also blow up your budget. Why? Because you've likely contracted an SI for help with the deployment and consider the engagement a one-time expense. Production lines are dynamic entities that require constant restructuring, optimization, and "on-the-fly" adjustments. They are not one-time expenses.

Increase the magnitude of the issues mentioned above by ten. Then throw in about fifty more roadblocks, the majority of which were unforeseen, and expect to seek approval to implement customized solutions for each from about nine different decision-makers.

Suppose our industrial manufacturer employed a system that delivered visibility into both the robot and the components with which it interacts. It could keep end goals in sight with full transparency every step of the way. It's time to turn on the flashlight.

Freedom Robotics' fleet management platform supplies a series of dashboards that deliver visibility into any robot at any time. With the proverbial flashlight turned on, operators can pinpoint issues that cause delays on production lines and better manage them moving forward. A quick glance at the dashboard illustrates a fundamental problem related to external device connections.

Below you can view the problematic traffic light. Freedom's platform allows operators to identify the status of the traffic light and formulate potential solutions. 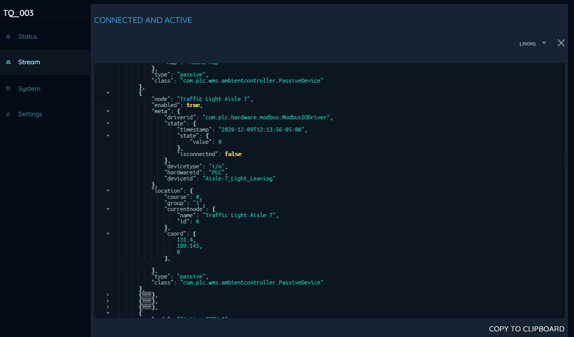 Measuring performance is a straightforward process as a result of Freedom's data aggregation capabilities, which deliver instantaneous movement reports. Below is a report highlighting performance metrics associated with the automation of a particular task. As you can see, problems transpiring under the hood are easily identified. 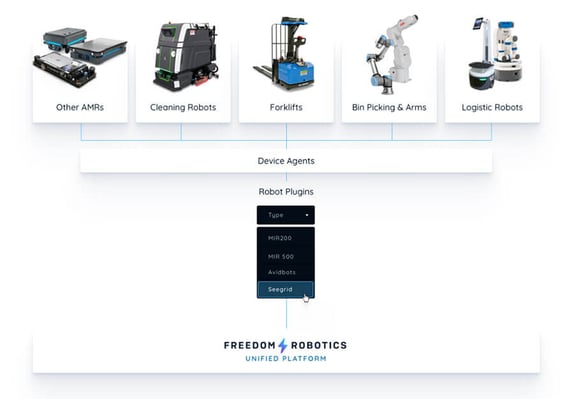 Let's revisit our gasket delivery loop example. Automation of this task requires one full-time technician to manage roughly ten robots. The technician needs to keep a close eye on the monitoring system to ensure there are no errors.

But robot batteries die at random. They get stuck due to obstructions. They get lost. In other words, errors will invariably occur.

When they do, technicians need to respond ASAP. But the solution isn't always easy to come by because it's not always clear which devices are involved, the level of urgency, or the root cause. It shouldn't be this difficult to manage and maintain robots.

Suppose our industrial manufacturer utilized a robotic fleet management system capable of delivering detailed alerts that answer those open questions and deliver them via convenient channels. It's time to deliver actionable intelligence to those who solve problems.

As shown below, we can immediately see that the robot is in trouble (which). It went down ten minutes ago (when) due to a low battery (what), and it was last seen at the south side of the line near the chargers (where). 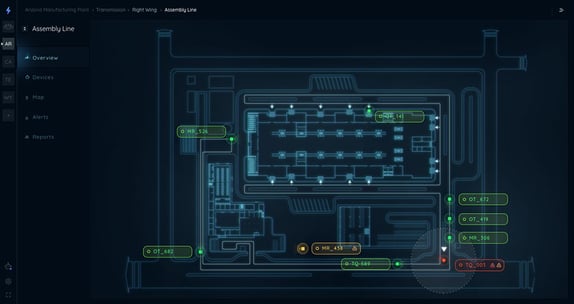 Operators in charge of guaranteeing up-time are responsible for monitoring multiple production lines spread across various buildings on large factory floors. The simplicity of smart alerts and the detail of the accompanying summaries provided by the Freedom platform makes it easy to monitor it all in real-time. 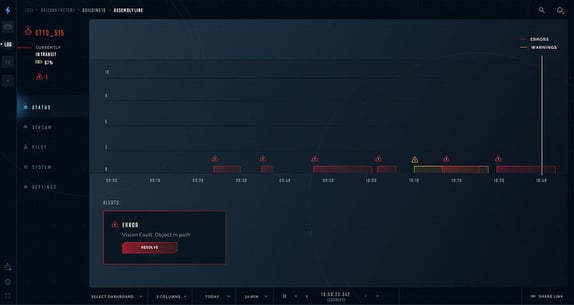 Freedom's smart alerts can be transmitted via text or email and directly integrate with services such as PagerDuty, Slack, IFTTT, and more.

One last time, let's consider our industrial manufacturer's automated gasket delivery loop. The robot that performs this task has no issue transporting the gaskets from Point A to Point B. However, it does take a human to unload the gaskets and attach a new cart to the robot so it can drive back to Point A for another pickup.

As Peter Drucker proclaimed, "what gets measured gets managed." With this in mind, it makes sense that simple statistics such as average idle time between gasket deliveries rarely get measured. And, where measurement processes do exist, they are unique to individual vendors, making it impossible to answer questions from management such as, 'what's the average idle time on all those manufacturing robots we bought?' or 'are Brand X's robots performing as promised?"

Suppose our industrial manufacturer decides to implement intuitive and transparent dashboards capable of generating standardized reports that identify the ripest low hanging fruit and offer critical insight into specific manufacturing processes that can be optimized. It's time to turn big data into smart data.

The report below visualizes an alert from the robot performing the gasket delivery loop — the brighter the square, the more alerts occurred at the location. When patterns like this emerge, it becomes easier to draw meaningful conclusions and implement solutions.

Many times robots in manufacturing settings are briefly left idling because another robot is in the way. Sometimes this can cause a slowdown on the production line. Let's examine the alerts that appear only where the robot didn't move for more than one minute. We’ll also filter for alerts that occurred strictly because the safety lidar on the robot was triggered.

Armed with this new insight, the area with relatively few alerts now becomes more interesting. Ah-ha! An operator can now infer that placing signs that clarify the robot's pathway can decrease interference and reduce the alert's occurrence.

It's important to keep close track of your robots and ensure they deliver the results they are brought on board to achieve. As demonstrated, the challenges you will encounter in reaching this goal are far from unsolvable. All it takes is some pragmatic thinking, realizing that robots are no different than any other project or capital expenditure, and the right set of tools to deploy, manage, and optimize your robotic deployments.

An end-to-end solution that operates through a “single pane of glass,” the Freedom Robotics Fleet Management Platform deploys, manages and optimizes the performance and efficiency of the production and material handling workflows carried out in your facility by existing AMR, AGV, and automation technologies.

Learn how to accelerate the return on your robotics and automation technology investments with Freedom Robotics.